Guys, I don’t want to jinx it, but it seems like it might be finally getting sunny. We even managed to take to the terrace for our weekly members’ breakfast and I’d estimate that at least 13 ice creams have been consumed on the premises. But less of the weather…

We’ve had visits from Karsten at Autodesk sorting us out with some incredible software; and Nikita from ReWork checking out the space for the Future of Education event on June 16th.

Thursday saw the Creative Society join us in the Pearson Lab to host an all-day book design workshop with their ‘This Is It’ competition finalists. Architecture for Humanity held an aquaponics session in the morning and were back again as we hosted the first in a series of Social Enterprise meet ups, with talks from AfH as well as our other members, Khama, 2052 and the Restart Project.

Meanwhile, a group of ten of us took a Makerversity trip out to the Curve gallery at Barbican to see Momentum, by United Visual Artists, which our members, Alex Bygrave and Hal Watts, were involved in.

Great news for our member, Imeh Akpan who will be speaking at the UXPA conferenceon Tuesday 22nd July, don’t miss it!

Tonight, we’re officially welcoming some of our most recent members to the group with a little show and tell and Friday night drinks in the space!

And finally, a huge good luck to both Stables & Lucraft and Approved(by)Pablo with their installs this weekend. Don’t miss Ulmus Londinium in Covent Garden and Futurismo Ancestral, here in Somerset House, both opening early next week!

Meet the Amsterdam members
LET’S ‘GET STARTED WITH PRODUCT DESIGN’ 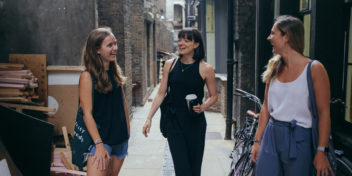