Welcome to Hydro-Commons team Helen Tartaglia and Nasra Abdullahi, our Northbank BID Residents! They join us from this summer’s programme: City Co-Labs: Re-Making Place Civic Hack. Makerversity’s Civic Hacks addresses the big social issues of our time. We create new collaborations between makers to radical solutions to social problems.  This hack explored the future city via the way we use and design its public spaces.

Makers worked together on new ideas re-imagining the function of urban public space. For London Design Festival we presented outcomes in partnership with the Northbank BID.

We encouraged visitors to vote for their favourite Hack proposal during the exhibition. The winners receive a £1000 grant and 6-month residency at Makerversity. This was the Hydro-Commons proposal:

A population increase led to a decrease in permeable, green surfaces which also double as public spaces. Our research explores ways to drain, absorb and re-use  excess rain water. Working with permeable materials such as sand and soil, we were able to create a material-led frame work to develop a new type of public space. The final “Hydro Commons” space proposal is a 1500 mm x 1500 mm tank, with a flat surface sitting above ground. The tank’s underbelly absorbs or stores rainwater whilst the bed acts as public space with various uses, from micro-beach and splash pad to hydroponic seating area. The simplicity of the tank means Hydro Commons can iterate across the city, creating new sustainable public spaces of play and lingering in the city.

We caught up with Helen and Nasra as they start their residency this week:

Hi Hydro-Commons! Tell us a little bit about you…

Helen: I studied MA Design Expanded practice at Goldsmiths University (2017-19). There I developed a hybrid practice that broke away from traditional roles in design, instead creating a portfolio of research that focused on some of the most challenging issues faced by urban society.  Through this research I hope to open up new sets of questions and propose alternatives that challenge how we dwell (or could dwell) in cities.

Nasra: I’m currently a part 1 architecture student. Outside of my formal education, I am also part of the second cohort of New Architecture Writers. How did the Civic Hack and London Design Festival experience go for you?

Helen: Being able to meet other like-minded designers and discuss the future of public space was incredible. The Hack was a really great tool for us to begin to unpick the concept and re-frame how we approach building cities. There aren’t many places outside of universities encouraging those kind of cross-collaborative discussions.

Nasra: Prior to attending the Civic Hack, I had no idea what to expect which enabled me to go in with an open mind. As the Civic Hack was open to everyone, it became a space where non-designers and designers could come together and collaborate. This experience has highlighted the necessity for designers to have effective dialogue with other disciplines and those who do not generally engage with design thinking. What did you learn from this process? What were the main challenges as well as successes?

Helen: The hardest part was taking the concept of water as public material and pushing it into a final outcome. We spent quite a few weeks using a thinking through making framework to try and push the proposal which was both challenging and rewarding. Ultimately it was the making and sketching that got us to the final idea.

Nasra: After the initial Civic Hack weekend, our project took a few weeks to form and come together. In hindsight, we were laying the foundations and forming the basic framework for our project. At times this stage was difficult as it felt like we were not progressing as quick as we wanted to. However that stage was necessary as it informed our work ethic and helped us create an effective dialogue with ourselves and who we were designing for.

What are your goals and ambitions for Hydro-Commons now?

Helen: We would like to have a working prototype by April, with the hope of developing several uses through community workshops.

Nasra: We want to continue the research for Hydro-Commons and reach out to designers and other professionals across various disciplines. We also aim to carry out several communal workshops exploring water as a public material. What are you hoping to achieve within Makerversity as part of this six-month residency?

Helen: It’s a great chance to get feedback from other designers and makers and also be able to use the facilities such as the workshops.

Nasra: With Makerversity, we are able to have access to their specialised facilities including the workshops. This will enable us to have access to incredible designers and thinkers who can help further our research.

What are your sources of inspiration for this project?

Helen: We’ve looked at how the Dutch work with excess water rather than against it (take for example floating houses). There have also been a few similar projects to ours that we’ve spotted, such as the fire hydrant water fountains in New York.

Nasra: Currently I’m interested in ancient ways water was used, stored and shared. It is essentially the same human story, but I want to explore the nuances around modern ways we can hijack the main narrative around water and ownership.

And finally – what is your ideal future city?

Helen: One that engages citizens more fairly in its development and allows everyone access to its social, economic and physical infrastructure.

Nasra: A city whose ordinary inhabitants are able to feel and know that they have a right to participate despite the invisible boundaries that exist. Read more about our recent exhibition here and sign up to our newsletter for future cultural programme events! 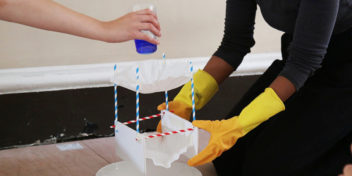 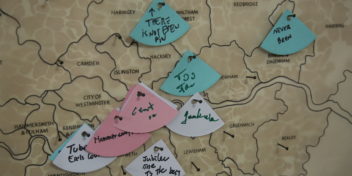