Makeversity member, Luis Zayas, is a Product Design Engineer and musician. He is currently developing a new accessible music instrument to encourage more people to start making music. We sat down last week and had a go!

Tell us a bit about what you’ve been working on
Kazumi is an inclusive music instrument. It is a completely new interface that is designed to be engaging for anyone that is interested in making music. Its design has been subject to many constraints in order to remove as many barriers to participation as possible.

It is an instrument for aspiring musicians but also for aspiring makers as it has been designed as an open-source DIY kit. This will not only allow anyone to learn about the materials and processes that have gone into the instrument but it will empower users by encouraging them to hack and customise it as the ultimate way of appropriation. Where did the idea first come from?
I wanted to take the idea of design constraints and affordability to an extreme and apply it to the design of an electronic music instrument. To remove anything that wasn’t absolutely necessary for musical expression. At the same time, I found the need to bridge the gap between assistive music technology and mainstream design (and not so mainstream maker culture).

How has it changed along the way?
It started off as a very simple flat disc with pull-out tabs and has become a seven sided pyramid so it has definitely seen some changes. The only constant factors have been the circularity in the way notes are arranged and the modular nature of the kit. Apart from the changes in form, there has been a great amount of experimentation with different technologies such as MaKey MaKey, the Bare Conductive Touch Board and Raspberry Pi.

What materials have you used?
The latest prototype has a black laser-cut acrylic skeleton and the touch pads are an assembly of reflective vinyl, foam, copper film and polypropylene. Magnetic strips are used for all the fastening and neodymium magnets for the rotary switch. The rest are off-the shelf components such as the power bank, the speaker, MPR121 breakout boards and the Raspberry Pi 2.

The choice of materials has not only been guided by look or feel, it has been a priority to make sure everything I use is widely available, so that it can replicated in other parts of the world. This is also why most parts are made from sheet materials that have been either laser cut or vinyl cut. Highs and lows?
It has been mostly highs until this point. It is a very rewarding process to work on an idea to make it come to life physically. Not only that but making it work and showing my progress to people around me as I went along has been really motivating.

What are you most proud of?
Learning. This project has allowed me to step out of my comfort zone and experiment with tools that were completely new to me. This has only been possible because of the amazing amount of support made available by online communities. You feel a great satisfaction every time you try something new and it works.

Where would you like to take this project?
In the next couple of months, I want to take the current prototype to a stage where it is ready as a finished product. This will mean making a few cosmetic adjustments as well as collaborating with people that have the necessary expertise to make the software failsafe. At that point, I will launch a crowdfunding campaign, which will give me a better idea of how many people are interested.

I would like Kazumi to reach schools and kids who aspire to learn an instrument as well as music tech professionals and hobbyists to see what they come up with. Both hardware and software will be open-sourced so there is no limit to what it can become.

Who would you like to collaborate with?
There are a few relatively new companies whose work I find especially exciting. These are Bare Conductive, Technology Will Save Us, Little Bits and Kano. I admire their mission to spark the curiosity of new generations and inspire them to become makers and problem-solvers as opposed to passive consumers.

I also want to carry on collaborating with Music Hackspace and Drake Music (a national arts charity that works to make music more accessible) as their help has been invaluable for the development of this project. If you could learn a new skill what would it be?
I would like to be better at speaking in public. I feel like I sometimes lack confidence to get my ideas across powerfully, but I know this takes a lot of practice.

What memorable moments have you had at Makerversity?
My first day was definitely one, I moved in and everyone was starting a two day makeathon so it was hectic. Everyone running up and down brainstorming, sketching, making stuff in the workshops… I was really happy to be in that sort of environment.

What is the best thing about being at Makerversity?
People. Everyone has very different backgrounds, areas of expertise and ways of approaching challenges. My desk is on the way to the kitchen so I will be working on my project and people will stop to chat about what I’m making. Its great how everyone has something completely different to say or ask.

Check out Kazumi in action here:

THE WEEK THAT WAS: GET STARTED WITH PRODUCT DESIGN 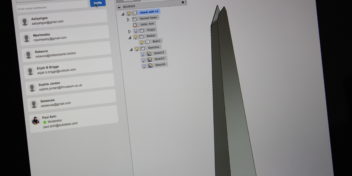