We sit down with one of Knyttan’s founders to talk about the launch of Knyttan, a knitwear company that allows the user to design their own product and watch it being made live. Their shop is currently open to the public in the New Wing of Somerset House. Where did the original idea for Knyttan come from?
When Hal and myself were at the RCA, I was really interested in digital manufacturing, and the fact that you can control industrial machines in a more digitally controlled way means you can do various different things.

Hal and Kirsty (the 2 other founders) worked on a consultancy project together for the British Olympic team, through doing so they figured out a knitting machine can be a bit like a 3D printer but for wool, in that it can be coded to produce different things every time, and that the challenge lay in creating a system that simplified the process, workflow and design side so that anyone could do it. So it’s lots of different things that all came together really.

Has Knyttan evolved along the way or has everything gone according to plan?
No I think some things are very very different right, like we never expected to be here in Makerversity @ Somerset House with a shop for example. The other idea to bring on other designers to play with the technology was kind of always there but we’ve got better people than I thought we would and it was even easier than I thought it would be, because i think people think that it’s cool  (laughs)

Any highs or lows from installing the shop?
Just that It was way harder than anyone expected, Hal and Tom from Vault 4 (Stables and Lucraft) pretty much built a whole house, with soundproofing and everything, so that was pretty full on as a thing. Another low is that it was at least one month late getting everything up and running and that just costs lots and lots of money.

But the whole thing was a massive high, seeing it standing in the shop working, although it’s such a continuous thing, there’s still loads of improvements to be made.

What are you most proud of?
(Long pause) Well i’m not yet haha. The feedback from a business perspective is they don’t see the value in designing things for themselves because they’re not designers and so why would anyone want to do that and I think that’s wrong, but i also don’t think it’s completely wrong. So I’m interested to see how many people actually take on the ‘design your own’ manifesto behind it. If we get feedback that everyone wants more control over the designs than I think that we would feel we’ve achieved something.

Collaboration has been key to your process, working with other Makerversity members and of course with Somerset House too…
The nice thing about Somerset House is that they have really gone out their way, they put faith in us when we had nothing, we never had to formally submit plans of what we were going to do, we never formally had to get a sign off on the design of the interior or anything like that which I think we’ll never find anywhere, ever again.

Additionally the MV community has been amazing;Common Works have been instrumental to bringing the user experience to life, Luke Walker and Luke Bennet have done all the photography for us, Stables and Lucraft also designed and installed the shop upstairs, so it’s not only Knyttan it’s actually produced at Makerversity, which is quite a big thing for us and quite a big deal for everyone here.

Who would you love to collaborate with?
David Hockney, because he likes drawing on ipads and so he’s interested in how digital tools work with modern stuff – it’s a dream collaboration.

What’s been your Favourite day at Makerversity?
I think the days right at the beginning when it was complete chaos and it felt like we were part of a big secret were great. I think if anything it’s actually way better now than it ever was, but there was a real palpable buzz that something super exciting was going to happen here.

What’s the best thing about being at makerversity?
Well there are loads of things right so, just to list them; the location is not just central london it’s Makerversity @ Somerset house which is a bigger community that we can tap into and grow with and that’s an amazing starting point. Then if you look at the creative community here, people are really keen on working together and that’s the heart of the place. The new wing entrance also puts us on the map, and you can see how it’s going to be something really big and I think the best thing about that is just being a part of it.

Knyttan’s shop is open to the public in the new wings at Somerset House – entrance via Waterloo Bridge until March 2015. You can also visit their website to have a go at designing and making your very own scarf!

KNYTTAN’S FACTORY OF THE FUTURE IS TAKING SHAPE 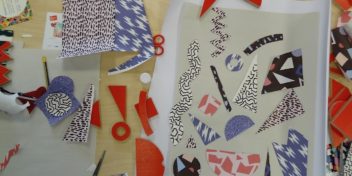 The people of the print 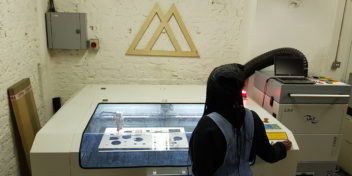