Makerversity’s Civic Hacks addresses the big social issues of our time. We create new collaborations between makers to radical solutions to social problems.  Re-Making Place explored the future city via the way we use and design its public spaces. Makers worked together on new ideas reimagining the function of urban public space. For London Design Festival 2019, we presented the Civic Hack’s outcomes in partnership with the Northbank BID. What do our future cities look like using co-making and collaboration across disciplines? The Northbank BID‘s Vision for Strand-Aldwych looks at ways of pedestrianising this area. Makers used their public consultation as points of departure to explore various proposals. Our initial question was this: How can we enable inclusion, interaction and civic good in urban public space? Following the Civic Hack, makers had time to refine their proposals leading to LDF. These were the three proposals visitors could vote for: How we could develop sustainable drainage systems which also act as public spaces? London receives 6 billion tonnes of rain water each year. Their research began by an exploration of ways to reutilise this excess rain water. The final proposal is a 1500 mm x 1500 mm tank with a surface that sits above ground. The underbelly of the tank absorbs or stores rain water. The bed acts as a public space, be it a micro beach, splash pad or hydroponic seating area. This proposal looked at non-traditional and neglected public space users. Human opinion on the space around us is a given, but what about trees? It imagines involving trees in decision-making processes, such as public space consultations. Like us, trees form networks expressing positive or negative signals about their environment. They imagine if citizens could ‘subscribe’ to a tree. They could receive notifications about its conditions and surroundings via email. Caring for Carers focuses on carers’ needs for breaks and public space users’ access needs. “Carers” in this exhibition includes anyone who cares, unpaid, for a friend or family member. They are proposing a pop-up that advocates breaks for carers. It provides a space for dialogue about their needs, from their perspective. Part of these needs, we aim to focus on how public transport can be more accessible to them, and the people they care for.

Alongside these proposals, we exhibited a range of perspectives from Makerversity’s community. They revealed innovative design viewpoints around access, interaction and sustainability in cities. How can we co-make future cities – in the present?

Studio INI is a design studio based at Makerversity. They displayed a projection of the performance ‘Samaritan’. It took place within their installation ‘Urban Imprint’ commissioned by A/D/O-MINI in New York. The installation adapts to the movements of its users. Through springs under its rubber surface, its pulleys create fluid and organic motions. It explores ways nature can become a source of inspiration for the built environment. How could urban space adapt to us rather than the other way round? A prototype on display alongside the film let visitors interact with its way of working. Mettle is a Makerversity-based product design team. They explore solutions to counter access and sustainability issues related to future cities. One of these includes their ‘Line of Sight’ concept for a sensor and light-based pedestrian crossing. Alongside the display of past projects, they have revealed a new initiative. Visitors were able to input their own answers to the question “What would your ideal future city look like?”. The answers varied, from “caring, co-operative” to “free from pollution”. You can still view all the messages and add your own here! How aware are we of the levels of air pollution we can encounter daily in public space? Makerversity member SO-RA seek to solve this by making this experience more tangible. Visitors were able to blow into their Carbon Dioxide detector. They could view rising numbers on a screen, with a warning when it reached critical levels. A Dust detected showed an animation for good, medium or bad levels of dust particle pollution. How can sustainable solutions for the city of the future also honour tradition? Makerversity member Hetco looked at the way religion can meet science. Phyto-Offerings re-imagined the legacy of flower offerings on the river Ganges in India. This included designing a terracotta pot letting hyperaccumulator plants’ roots absorb water. These plants can absorb toxic contaminants present in the river, such as lead or cadmium. Exploring future cities should can also look at dystopian futures we should avoid. Sam Roots, based at Makerversity, imagined a fictional “Ministry of Public Order” display. It reflects upon current privatisation and surveillance issues in cities. A ukulele, dice and cans connected by string became insurgent objects in public space.

Watch this space for the announcement of our winning Civic Hack team! They will go on to develop their idea in a 6-month Northbank BID residency at Makerversity… 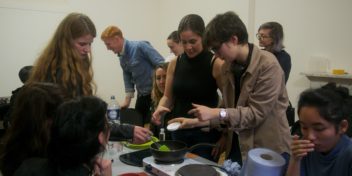